Cycling '74's Max is a very powerful piece of software that supports MPE. Now, with Max's RISE Package, creating your Max patches for the Seaboard is easier than ever!

Max 7.2 introduced the objects mpeconfig, mpeparse, and polymidiin, allowing easy integration of MPE-enabled devices like the Seaboard. Read this tutorial to learn how to use these objects to receive and visualize MPE data from the Seaboard, as well as how to set up Dashboard so that Max will respond to the Seaboard's dimensions of touch.

Max 7.2.5 and Cycling '74's RISE Package brought many more tools optimized for the Seaboard. These include numerous new MPE- and Seaboard-based externals, several BEAP modules, and projects that demonstrate the powerful potential of the combination of the Seaboard and Max.

To explore these tools, after downloading and installing Max, download and install the RISE Package from the Max Package Manager by going to File > Open Package Manager, searching for 'RISE', and clicking 'Install'.

Next, open the patcher RISE_launch, located at Packages > RISE > Extras > RISE_launch.maxpat. Here you will see lists of the MPE and RISE externals, BEAP modules, and demos. Clicking on each tool will open its help file, illustrating how to integrate the tool into a patch.

The Max RISE Package includes several BEAP modules allowing you to easily integrate your Seaboard with other BEAP modules. BEAP, an ever-expanding library of high-level modules, borrows from the model of analogue modular synthesizers: all connections between modules are signals and typically use a range of 0–5, similar to the 0–5V standard of Eurorack analogue synthesiser modules. 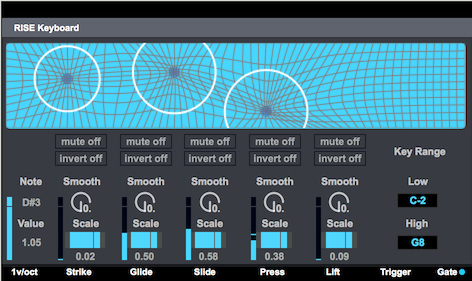 To insert a RISE BEAP module into your patch, in Edit mode, right-click and in the pop-up menu navigate to Paste From > RISE > BEAP. You'll see the following modules:

Each of these objects has an associated helpful example snippet. To view these snippets, while in Edit mode right-click and then in the pop-up menu navigate to Paste From > RISE > max. Each snippet is an example use of the relevant object and contains additional objects that make integration into your patch even easier.

Finally, the Max RISE Package includes several impressive demos of mappings between the Seaboard and advanced audio and visual synthesis.