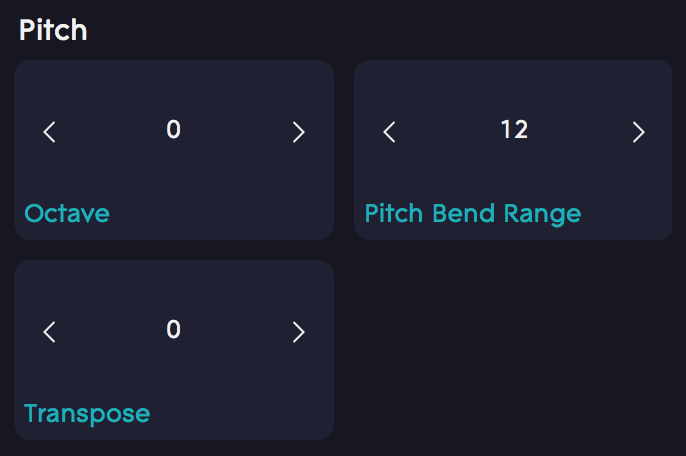 How do I set up Kontakt?

Kontakt is multi-timbral, so it is able to perform polyphonic expression of Glide and Slide by receiving each MIDI channel from the Seaboard on an individual module. Each Kontakt module will produce only one note at a time, so that pitch-wide MIDI messages like pitch bend and CCs can be expressed polyphonically.

First, let's load an instrument and make it respond to the Seaboard's dimensions of touch. Later, we will duplicate the instrument to receive multiple channels.

To make this easier, first set ROLI Dashboard's MIDI Settings to MIDI Mode: Single Channel. Now all notes will be sent on 1 channel, which doesn't allow for polyphonic expression of the dimensions of touch but makes it easy to preview sounds. Make sure that the pitch bend range is set to 12. 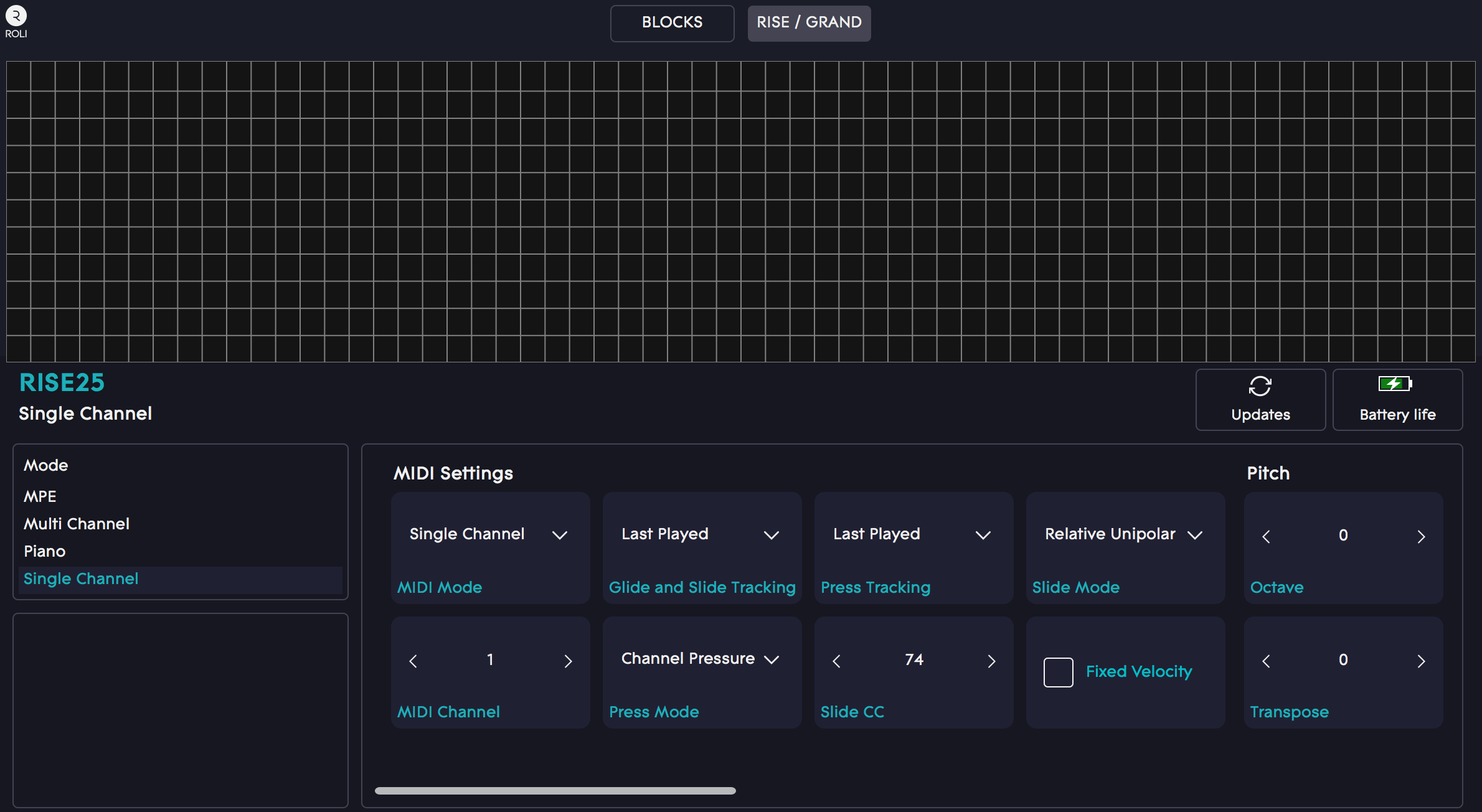 Open up Kontakt and load an instrument. You'll notice that initially it only responds to Strike, and that Glide is not polyphonic. Glide is not yet polyphonic because we are only using one channel and sending it to one instrument module in Kontakt. Glide is transmitted as pitch bend, which is a channel-wide message that will affect all notes played on that channel.

Now we will refine the patch to respond to the Seaboard's dimensions of touch. Each dimension of touch is transmitted as a standard MIDI message. Take a look here for each of those messages and set your Kontakt module accordingly. Most of these settings are hidden away behind Kontakt's spanner icon.

Many Kontakt instruments have multiple layers of samples, so make sure that you have selected 'Edit all groups' before you start routing modulation, otherwise the effects will only be heard on certain layers.

Now you're ready to add Modulators, which will send the Seaboard's MIDI messages to various parameters in the Kontakt instrument.

Modulators are added under the "Mod" tab of each section, and will have different routing options depending on which section they are attached to. For example, to send pitch bend messages, to the instrument's pitch, we will add a Mod in the "Source" section.

Glide is transmitted as pitch bend. Kontakt has a maximum pitch bend range of +/- 12 semitones. Make sure that ROLI Dashboard is also set to 12 semitones, and set your Kontakt instrument to the same in the "Source" modulators.

Note: some instruments by default have a limited up or down pitch bend range. To use the full pitch bend range, you may go to the Multi Rack view, select the Options tab, and under "PB Range" drag the "Down" and "Up" knobs to -12 and 12 respectively:

Using the same method, we can add more modulators to respond to:

Velocity (Strike) – you might want to set the destination to volume.

Mono aftertouch / Poly aftertouch (Press)  – perhaps the destination would be a filter. Open a filter FX, and select the cutoff as the modulator's destination.

CC74 (Slide) – In this example we will also set Slide to a filter, but you can use it to modulate any parameter that Kontakt allows. Slide is transmitted as CC74, and uses a starting value of 64 (central). So add a modulator with these settings:

Release velocity (Lift) – In the example below, Lift is sent to "drive" on a distortion FX unit.

Once you are happy that your patch responds to the Seaboard, save it as a patch, and load in several more of the same module with that patch loaded. Set each module to its own unique input channel. The number of modules you use determines the polyphony of your patch with the Seaboard.

For example; you might create 4 modules for 4 voice polyphony. The first would receive Ch1, the next Ch2, then Ch3 and the last Ch4.

Now that your Kontakt patches are ready to respond to the Seaboard's dimensions of touch on a polyphonic basis, you can set ROLI Dashboard back to Multi-Channel mode and set the Channel Range according to the number of channels you have used. Do not select MPE mode.

For example; if you have created a patch of 4 modules for 4-voice polyphony, set the Channel Range to 1-4: 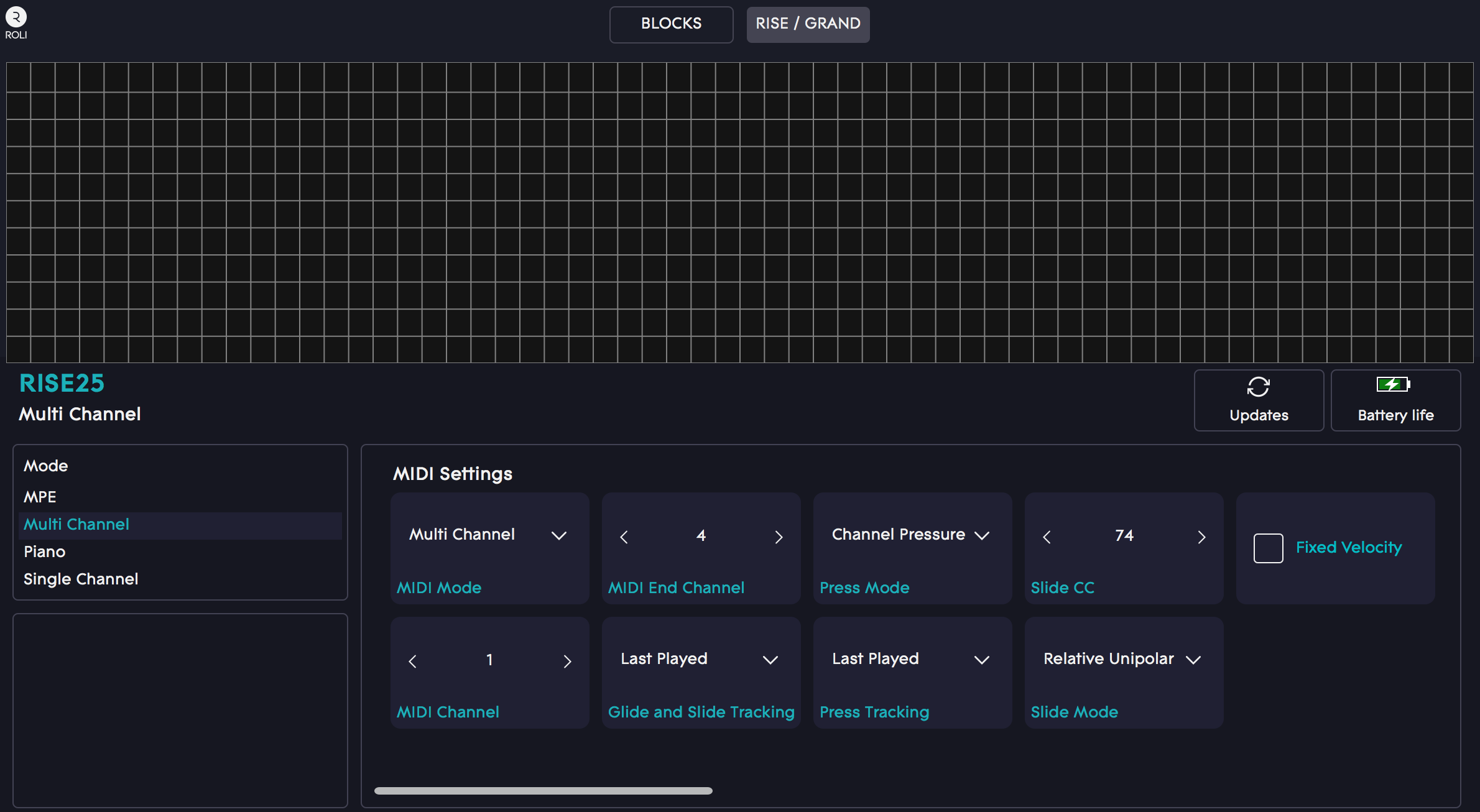 For more information, check out this tutorial video on creating orchestral brass sounds with Kontakt and Logic: