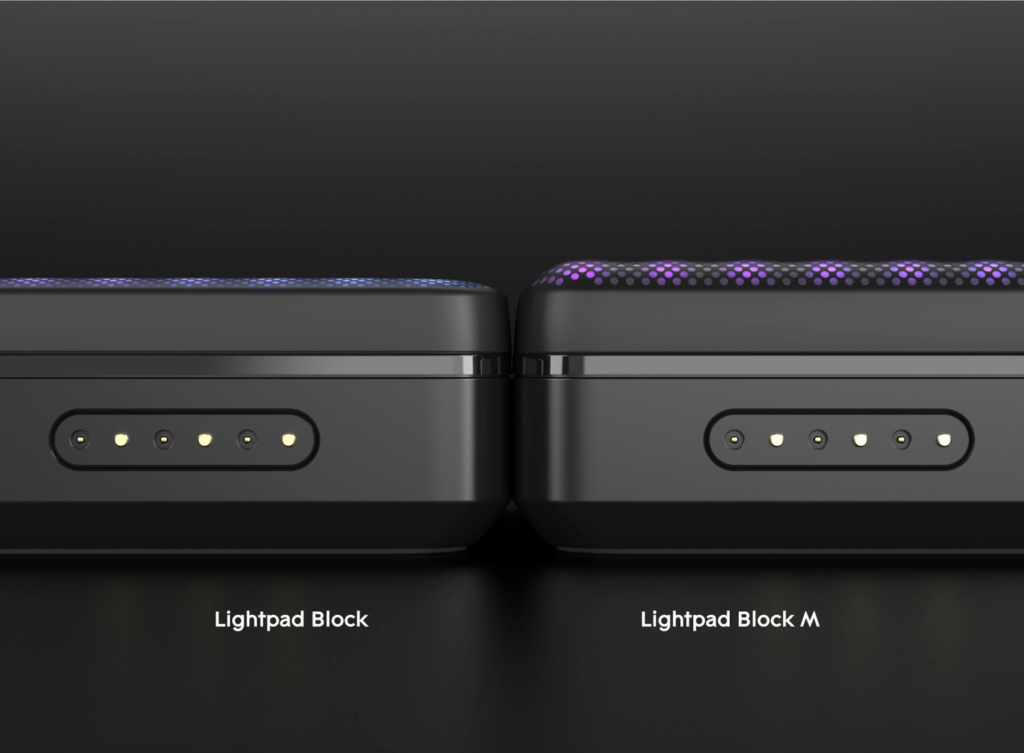 The Lightpad Block M is the next generation model of the Lightpad Block. Both models have the same capabilities and software offerings. The key difference is that Lightpad Block M has a brighter, deeper and more sensitive surface featuring 225 microkeywaves, allowing you to play with added precision and expression.

Advancements of the Lightpad M include:

Both the Lightpad Block and Lightpad M can be used with our free mobile apps NOISE and ROLI PLAY, bundled software including Equator Player and Strobe2 Player, and many other mobile and desktop apps and hardware synthesizers.

Why is there a Lightpad Block M?

The Lightpad Block M is the next generation model of the Lightpad Block. Both models have the same fundamental features and benefits. They are almost the same size and both of them are expressive, portable, and versatile. The key difference is that the Lightpad M has a thicker, deeper surface. The top of the surface is recontoured with undulating “microkeywaves.” Touch-responsiveness is enhanced on this redesigned surface, allowing for a more tactile and precise playing experience. The Lightpad M surface is also 50% brighter than the original Block and has a higher-contrast display, so it’s easier to move between notes and sounds on the illuminated surface.

I own a Lightpad Block. Can I exchange it for a Lightpad M or get a discount?

We are not offering a discount or exchange for those who already have the original Lightpad Block. If you already have a Lightpad Block and are considering the Lightpad M, it is important to note that you can play both together. They connect to create a continuous playable surface, although the feel of the surfaces are somewhat different.

Can I use drumsticks on either Lightpad Block model?

Do they come with the same software?

Please note, the free soundpacks are not included with the BLOCKS Studio Editions. A lot of NOISE presets are included in ROLI Studio Player and ROLI Studio Drums.

Can I use them together?

Yes, you can connect your Lightpad Block and Lightpad Block M together via BLOCKS DNA — and use them together with NOISE, ROLI Dashboard and desktop music production software.

Are they the same size?

Which Snapcase can I use?

What does the M stand for?

The Lightpad M refers to microkeywaves, the 225 small undulating contours that give the Lightpad M its enhanced tactile feel.